Slowly We Have the Feeling #9 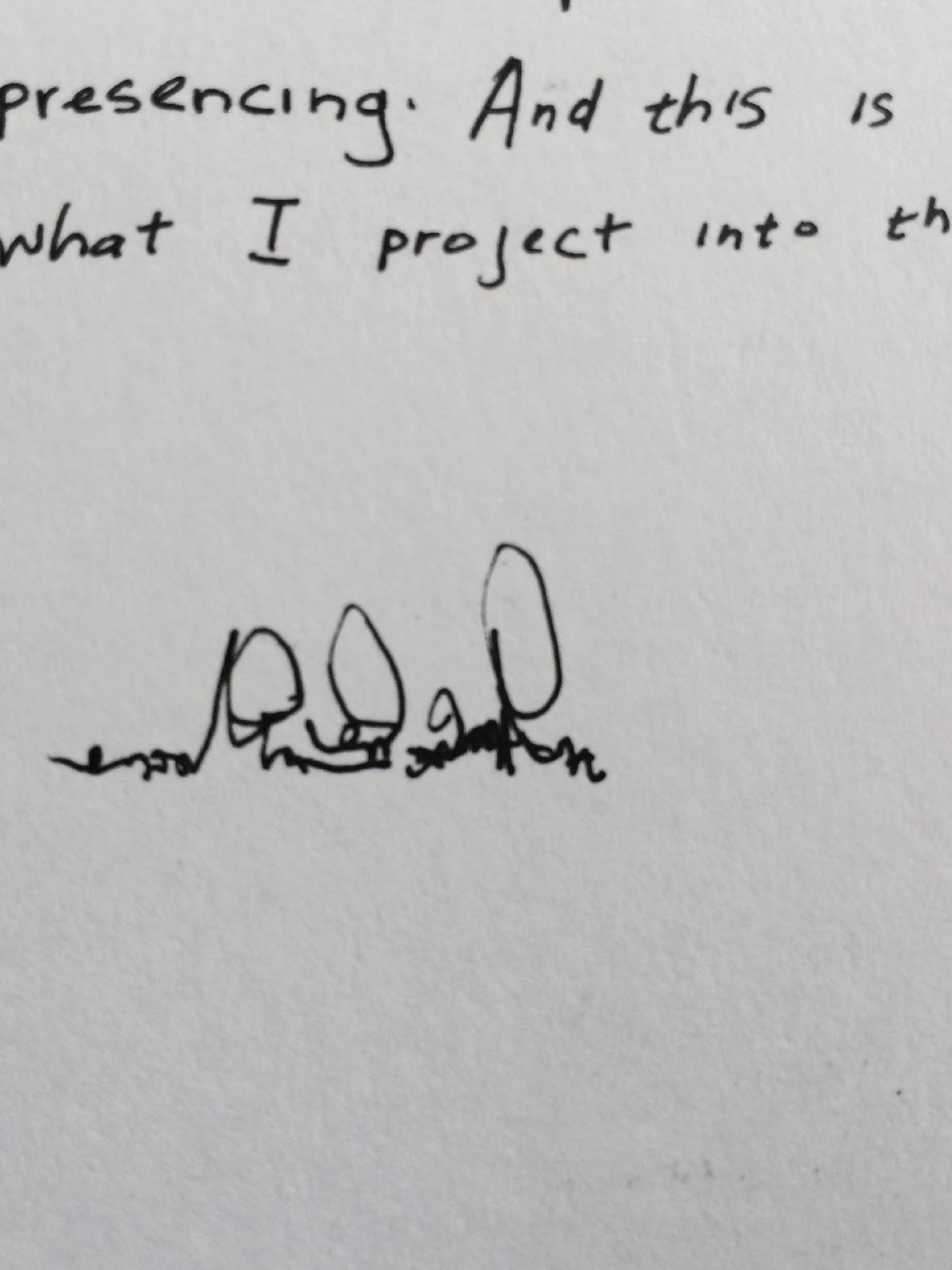 Slowly We Have the Feeling #10

I could be upended utterly by a line drawn across a surface, and all of a sudden it had become essential to know why: why was something so slight also stirring, and how did it appear that a seam had been opened along a small surface of a mountain whereby the mountain was absent but its immense presence implied, and it was a mountain all your own, that no one saw but you and no one else needed, but again so enormous in the pressure and gravity it brought down upon the page that, though, this was a mountain that was invisible and non-existent to observers, outside of you seeing it yourself, it affected the geography not only of what you placed on the page but also of the terrain from which the emergent thoughts originated. It struck me suddenly that these lines were specious to a kind of math that used moving lines to measure some phenomenon of time or space, some simultaneity that was so inside our actions, our walking across a room, so deeply embedded in the time in which everything has happened (things having happened so long ago still occurring in some corner of the room) that we’ve forgotten to study it or give it a name or draw a connection between it and writing, the language of the world, the language of your doing what you do (wanting to walk in the forest with her, wanting to see the moss of Norway). But, it wasn’t just the suggestion of an ancient math that brought me out of reading the novel I’d chosen for that day; it was also that you could draw a line across a surface, a flat, unimportant surface (the front of a discarded folder) and perhaps carry that line up four inches along the plane then have it loop back over itself; you could let loose another line, pull it out of this reading space (the book lay in proximity) and draw it over the same space but just slightly off, like a murmur of the first shape: you loop and build and return, drawing with a pencil, in the silence of some morning (except for the call of a raven: it’s early, you’re nestled in the woods), and in this drawing, these faint lines retrieved from a putting aside of reading, something immense was felt. The surface on which I was drawing made everything marginal; the drawing was indistinguishable from other accidental markings of a pencil made on some other occasion; you could hide many drawings here, because the drawings were slight and didn’t call attention to themselves; they wanted silence, to slip in the space between objects, to move objects around in their definitions by bisecting space; they wanted to turn space into math, a way of seeing composition, but not so much with the intention of solving the problems of space, which were numerous, it was more to activate the problems, so that you couldn’t read a page of prose or look at a sign or even go to write your name, without feeling a certain electricity everywhere. That was why the drawings were sometimes hidden and sometimes you felt the immensity of the thing the drawings signaled (a mountain, in my case) without ever seeing that thing in the drawn space. When drawings were hidden, the surface on which the drawings were made were hidden as well, and this was something sneaky that happened when you were drinking coffee. I was drinking coffee and my brain was changing, though I couldn’t see what mechanics were operating; the top of my brain was lifting away from my mid-brain and a walk opened up between them; you could now be hiking in a forest, running from one path to another and seeing all the rocks there were, jumping over roots, bypassing horse dung, and this was because some light had gone on in the world of your thinking, lifting and making space for you, and the liquid in the cup was the catalyst, though the cup was never to appear in the forest. But, you walked in the forest all day and even ran between junctions that connected the lake to the valley of firs or connected the cemetery to the land trust, and these were just signs that you began to memorize as the hours passed because everything else you saw was moss, or trees, or rocks; I thought about rocks as I climbed a scree in my running and counted the number of breaths in my brain; they were sentences breathed instead of spoken because this was the forest you were in, and a woman ran slightly behind you so that she could stop and look at mushrooms at will, but I knew when the forest grew silent it was because she had stopped: the sun was brighter, everything rose toward the sky, everything had fingers that didn’t touch you but didn’t avoid you either; the breath was in the place, in placing your foot in the scree, and imagining something missing—the wall on which all of this was happening in the middle fork of the brain, the music that was your memory, and you walked up and around and up and down and around and out into a clearing then down and down and around and up and slipping in the scree then up and over, across, across with her singing, then down and down and down mud and dung and around, stepping over, through, and stopping (pulling the socks up) then up, fast as you could, out over the brightest sun in the forest (again the valley of firs, second day coming) then around and down and flat for a long time then up and out, this breath, the sentence finally falling apart. And there it was: the mountain. 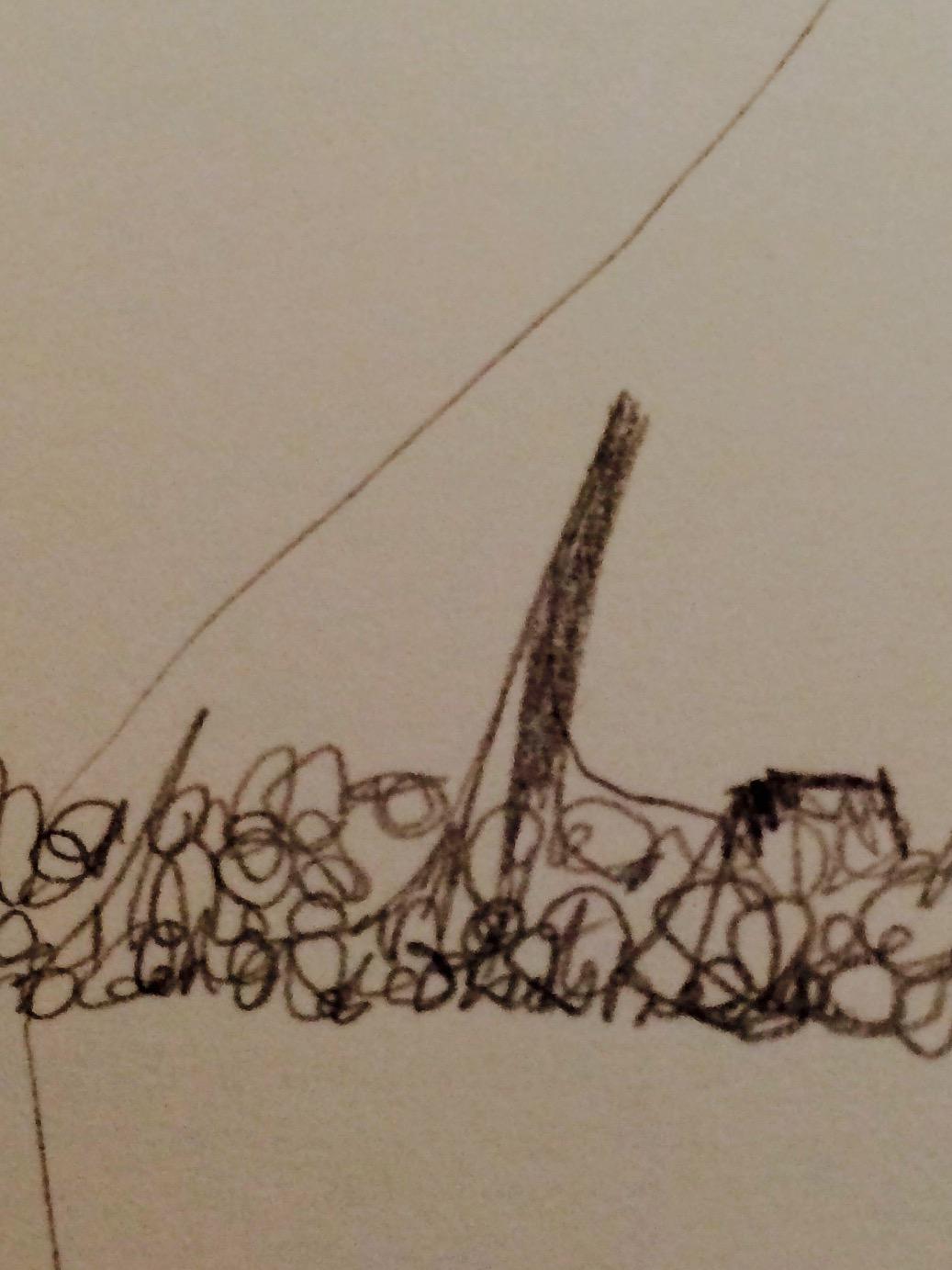 But, not a mountain for climbing—I was on the paper now—rather something to not see and sit up all night waiting for: someone said the clouds would clear and you’d see the mountain in the distance, so you waited and sat through the dark, welcoming, at last, the gray coming, and when there was enough light to see beyond the trees and shrubs and moss of the forest, out past the water, along the ridge of the forgotten page—well, there should have been a mountain. Yet, had there been one you wouldn’t have been sitting there waiting for it; you wouldn’t have drawn that faint, anonymous line that looped and doubled beside itself. The mountain rose over the page, in an alternative mode of being, invisibly a memory of some engagement of breath: you drawing a line to move deeper in time, years ago or yesterday drawing this line, but that moment looking back over what you had done, running a loop that seemed to expand the longer you were on it, and the mountain occurred as an idea of space, out of ear shot, out of any line of sight, even with rain falling in the clearing, the place of a new forest, a not-yet forest but a space held for some adjacent growing (the forest wouldn’t be planted here, but would hold bodies that had been removed and would serve as a break for runners: you stop; you want to know what has happened to the forest). And, there were signs throughout the forest that reminded me of a hand moving against the sky, where, if you are quiet, you feel a mountain there, but the hand that moves only wants to make a thin line that bisects the surface of the world, so that a kind of aliveness escapes, an aliveness that defines and gives heat to the day: the line was a bringing-down of silence and an opening. You climbed in with your looking, and ran and walked all day, as the light closed in. The line vibrated against the page, but nothing stirred and I did not stir, yet this forest grew in my mind. I drew the line and all went quiet and became vast, enveloping the body sitting at the table, the body in a t-shirt, boxer shorts, leg warmers, the church bells going off at noon, clanging nine times, again at 6; the hand searching for a way to see or to build in silence, without matter; so a line was drawn and space exploded, but not in any way you could see, and settled all over you, and it was then, it was in this moss-covered place, that something seemed to brush against you, an idea connected to an infinity of ideas, which, perhaps in that moment, felt merely like a bit of heat against if not your actual face than the face of your thinking. Somewhere in that moment of your face cracking and the page cracked, a drawing emerged that was a map of the running you’d done: it was the scree and the valley, the cemetery, the dump; it was Craig’s Head; it was that gathering of firs. Your face cracked and you drew a line on a folder, then put it away for a day or days, coming back to it only when it was a memory, some time having passed, some bridge between acts, and it was in this return that the line glowed and an idea settled in you about the mountain. I looked at the line and felt the past stir in my body; it was an indication of another day spent on an island off another state and the running I’d done on that island, yet the line had been drawn weeks before I’d traveled there so was made before anything in the forest had ever happened, yet you looked at it and it reminded you of the mountain calling out from behind the page, and though the mountain did not border the forest was not a part of the forest was not an idea of the forest the mountain emerged because of what you learned in the forest: you could be running up a scree and the person running slightly behind you could stop to look at mushrooms and this would make the world go silent, for a long moment, even your slipping could not be heard, and you’d look back just to make sure you were still where you were (you hadn’t been transported through your thinking), just to make sure the other’s body was there (crouching, with her mouth too near the fungus) and all of this fell into place, and above this scene a slight parting of the air, something to do with the trees, the cover of trees, the dim light of the forest, the angles of aliveness. I had already made this drawing but it seemed to be underneath the page rather than on top of it.

Renee Gladman is a writer and artist preoccupied with lines, crossings, thresholds, and geographies as they play out in the interstices of poetry and prose. She is the author of eleven published works, including a cycle of novels about the city-state Ravicka and its inhabitants, the Ravickians—Event Factory (2010), The Ravickians (2011), Ana Patova Crosses a Bridge (2013), and Houses of Ravicka (2017)—as well as the recently released Prose Architectures, her first monograph of drawings, and Calamities, a collection of linked essay-fictions on the intersections of writing, drawing, and community, which won the 2017 CLMP Firecracker Award for Creative Nonfiction. Recent essays and visual work have appeared in The Paris Review, Granta, Harper's, Stonecutter, and Poetry  Magazine. A 2014-15 fellow at Radcliffe Institute for Advanced Study at Harvard University and recipient of a 2016 Foundation for Contemporary Arts Grant and a 2017 Lannan Foundation Writing Residency in Marfa, Texas, she makes work in New England.

Purchase This Back Issue